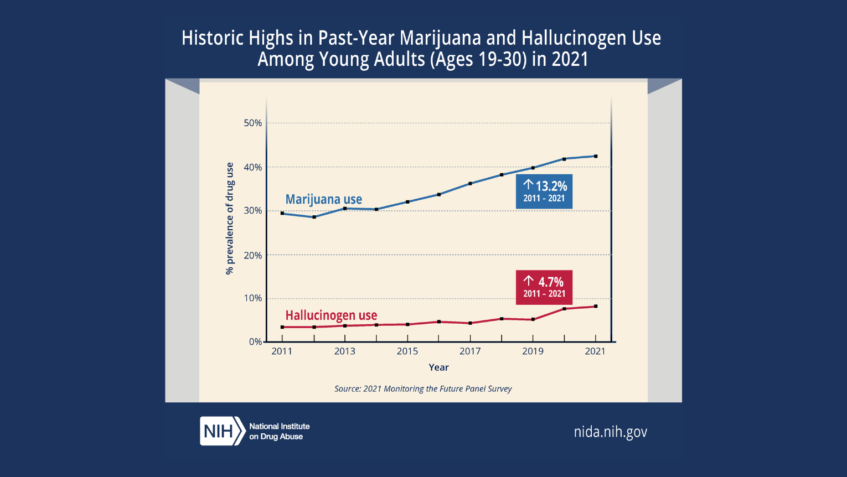 New data on substance use behaviors among young adults ages 19 to 30 released by the National Institute on Drug Abuse (NIDA) finds that marijuana and hallucinogen use among young adults ages 19 to 30 are at an all-time high. According to recent analysis of the Monitoring the Future (MTF) panel study, all three different use categories for marijuana, including past-year, past-month, and daily use, are at the highest levels reported since 1988, the year when these behaviors were first recorded. Forty-three percent of this age group reported past-year marijuana use and 29 percent reported past-month use, a marker for current use, which is drastically different from ten and even five years ago. Also at an all-time high is past-year hallucinogen use which includes narcotics such as LSD, PCP, psilocybin, mescaline, and peyote. Other concerning behaviors relates to vaping and alcohol:

On a positive note, compared to ten years ago, significant decreases were observed for past-month cigarette smoking and past-year non-medical use of opioid medications.

These findings underscore the effects of normalizing marijuana use on this population and urgently call for targeted prevention messages based on science and health. As observed with the positive trends related to cigarette smoking and the non-medical use of opioid medications, public health campaigns are effective at combatting industries such as Big Tobacco and Big Pharma and the same can be done to counter the false messages marketed by Big Marijuana.

A great prevention message based on science and health that can be used in any program or initiative is One Choice developed by the Institute for Behavior and Health. We encourage you to visit their website and begin promoting the One Choice health standard.

References: NIDA. 2022, August 22. Marijuana and hallucinogen use among young adults reached all time-high in 2021. Retrieved from https://nida.nih.gov/news-events/news-releases/2022/08/marijuana-and-hallucinogen-use-among-young-adults-reached-all-time-high-in-2021 on 2022, August 24