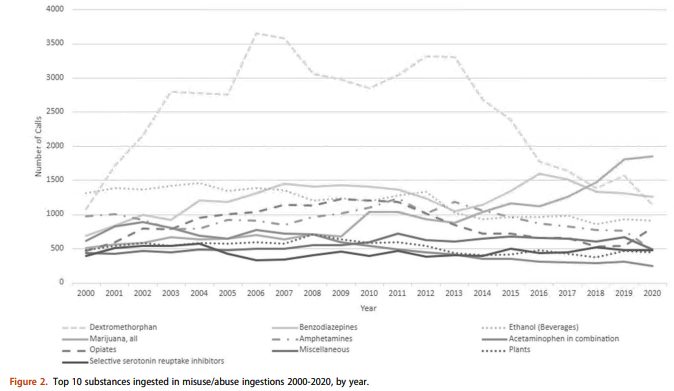 From 2000 to 2020, over 330,000 reports were made to the National Poison Data System on intentional substance misuse and abuse exposures for kids ages 6 to 18. An analysis of the outcomes and trends of these exposures were published in Clinical Toxicology with the following trends worth noting:

The study also analyzed the clinical outcomes of these exposures and found:

The trends observed in this research relating to the declining alcohol cases and rising marijuana and vaping cases align with self-reporting data captured in national surveys such as Monitoring the Future and reflects how public health efforts and policy impacts youth use. As the authors highlight, the increasing trend in cases of misuse/abuse involving marijuana is likely attributed to the marijuana legalization movement which has led to a decreased perception of harm and increased access and availability. Also, the declining trend observed for dextromethorphan involved cases is likely attributed to many states banning the sale of such products to minors.