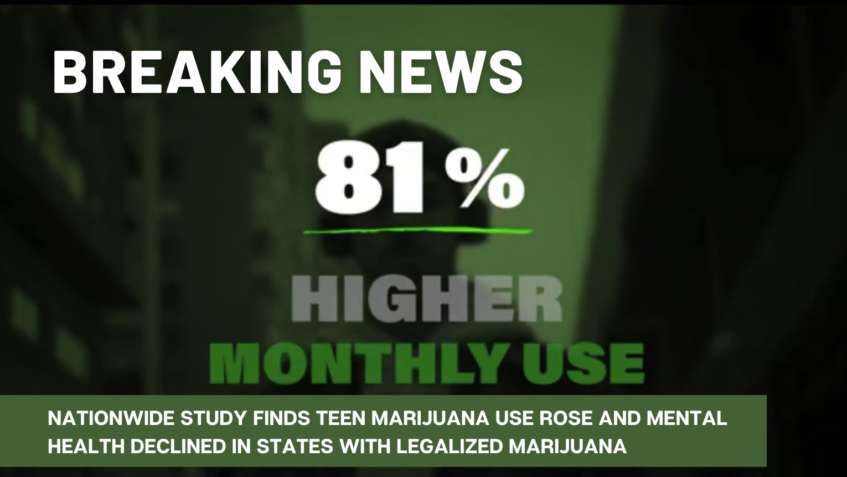 A first of its kind nationwide study, commissioned by Drug Free America Foundation, Inc. and Johnny’s Ambassadors, finds more youth are using marijuana and experiencing greater mental health implications in states that have legalized marijuana. This study analyzed federal data from the National Survey on Drug Use and Health (NSDUH) and the U.S. Census Bureau.

A difference-in-means test demonstrated that marijuana use is higher among all age groups in more highly permissive states, with 47 percent more monthly marijuana use among adolescents (ages 12-17) and 81 percent more monthly marijuana use among young adults (ages 18-25) in states with fully legalized recreational marijuana programs compared to states where the drug has not been legalized. “This is a fact that must become part of the conversation when states and local communities discuss legalizing the drug,” according to Amy Ronshausen, executive director of Drug Free America Foundation, Inc. (DFAF).

That finding coupled with a recent study that revealed that states that have legalized marijuana have higher concentrations of THC in their marijuana, the psychoactive ingredient, compared to states that haven’t.  Since the 1960s, the average THC potency in cannabis products has increased from 2 percent during the Woodstock Era to 4 percent in 1995, 12 percent in 2012, and over 17 percent in 2017, with a recent study showing average THC levels over 20 percent in nine highly permissive states. “It shouldn’t surprise anyone to learn that marijuana is big business and those ready to profit are willing to make their drug more powerful in the hopes of attracting new customers,” Ronshausen said.

Using fixed effects panel regression models with government data from the NSDUH and U.S. Census reports, this research establishes a correlative link between monthly cannabis use among adolescents and young adults and self-reported major depressive events with both statistical significance and strong explanatory power. Additionally, positive correlation is shown between monthly cannabis use by young adults and the prevalence of self-reported severe mental illnesses and suicidal thoughts. “The results of this study are alarming and should serve as a wake-up call to states that are considering legalizing and/or expanding recreational marijuana distribution,” according to Laura Stack, founder and CEO of Johnny’s Ambassadors and the mother of 19-year-old Johnny, who died by suicide from paranoid delusion after using high-potency marijuana.

“Many of those who want to legalize marijuana are quick to point to enhanced tax revenue that will pour into state and local coffers.  What they fail to share is the devastating costs these decisions can have on our children and young adults,” she concluded.

Check out the related news article covering the release of the study and new video below: